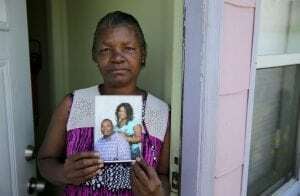 ST. PETERSBURG — Eleven-year-old Dontavion Fleming Jr. had just gotten his hair cut at the barbershop Monday with his dad and three younger brothers when it happened. Dad, he later told his grandmother, had been talking to a man in a car. It did not sound friendly. “Don't shoot me in front of my kids,” he remembered his father saying. Dontavion Fleming told his boys to get back inside the ATL Barber Shop on 18th Avenue S. Through the window, Dontavion Jr. saw his father fall.

As his father's body lay on the pavement, the 11-year-old son everyone calls “Tay-Tay” ran to his side, said Angelita Fleming, who recounted her grandchild's story Tuesday.

“No one deserves to be murdered in the streets like that,” Angelita Fleming said. “Especially when their kids are there watching their father die.”

The next day, relatives gathered at her house and remembered her son Dontavion Fleming for both his flaws and his devotion to family.

Angelita Fleming, 58, said her son sold drugs, and his criminal record showed it. He left a trail of arrests dating back to 2001, when he was first accused of distributing cocaine.

In the ensuing years, he picked up more charges: possession of marijuana, battery, fleeing and eluding, carrying a concealed weapon, and more. He had eight children, his mother said — six boys and two girls, ranging in age from 3 to 14.

Once he began accumulating convictions, the mother said, it became difficult for Dontavion Fleming Sr. to find legitimate work.

“He was just doing what he had to do to survive,” she said. “He knew he was wrong.”

An older brother, Michael Hazlewood, 34, said Dontavion Fleming Sr. was more than just a rap sheet. He loved his children. Hours before his death, Hazlewood said, his brother talked about signing up Tay-Tay for football.

“He just had a lot of people that disliked him because of the money he was making,” Hazlewood said. “But with the bad that surrounded him, there just wasn't anything but good in him.”

Dontavion Fleming Sr.'s family believes his killer was fueled by “jealousy” and was probably after money. Hazlewood said his brother did not sound stressed on the phone Monday, but he also never really displayed his burdens.

“You couldn't catch him not smiling about something,” Hazlewood said.

Investigators were still interviewing witnesses Tuesday, and a police spokeswoman said she could not release details about the shooting or what motivated the crime.

The ATL Barber Shop was closed Tuesday and no one answered a knock at the door.

The victim's children were with their mothers, Angelita Fleming said, but Dontavion Jr. walked over to her house near Childs Park in the early afternoon. Nieces and nephews passed plates of food and stared off at the street.

The mother said she talked to Dontavion Fleming Sr. about selling drugs before, but he “didn't listen.”

“These kids do what they want to do,” she said. “You can only talk to them and pray for them, and that's what I did — I prayed for my child every day.”

She held a picture of her son and his girlfriend and fielded phone calls from the family members who hadn't already visited. They all wondered: How could someone shoot a man in front of his children?

As people passed between the sidewalk and the steps, Dontavion Jr. disappeared into the back yard. Soon, a wailing sound came from inside the house.

Angelita Fleming hurried into a small room off the entry and sank into the couch. She cradled her grandson, pressing his head to her chest.

“I think this is the first time he's cried,” she said.